IPMS/USA again thanks Ross and his Team at SAC for supporting the IPMS USA reviewer corps with one more of many monthly releases, with extremely useful and well-thought out landing gear additions for the modeling crowd out here in the modeling world.  And thanks to IPMS leadership for sending it to me to be reviewed.

Consisting of 14 separate well-cast white metal parts, this gear is the usual replacement for the kit gear.  It's been my experience that GWH tends to use a more robust plastic than many other manufacturers, but SAC metal gear is still worthwhile to install.

Stalingrad has some chilly passengers & an ice-cold cop on the beat... 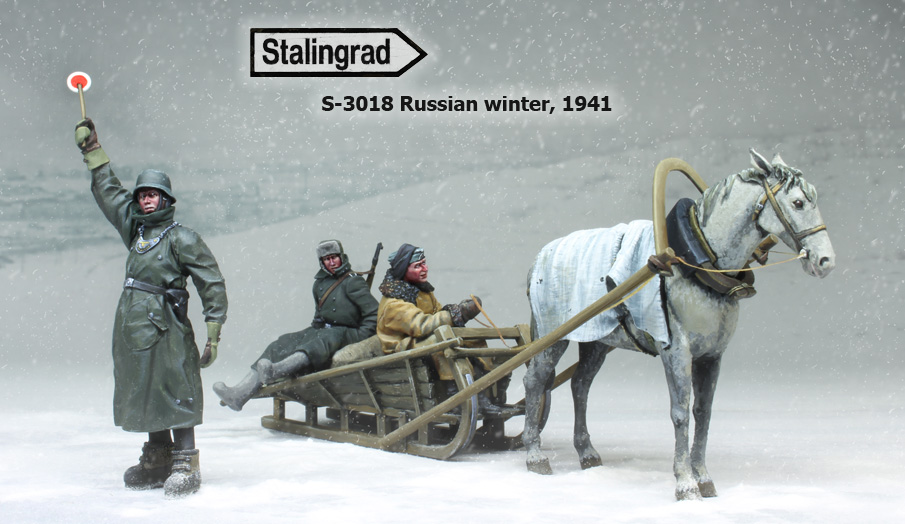 Stalingrad Miniatures brings us a new set of  35th scale WWII German soldiers seeking refuge from the Russian winter during WWII.  A set of three figures, horse and sledge sold together or the single MP by himself if you wish - all in 1/35th scale. These men are an interesting study of wartime photographs that were used to aid the sculptor which we will include in our preview...
Read on... »

The Duke's Armor Finished in April

New Forum Posts - Thu, 04/04/2019 - 17:48
After some marathon building over the past couple days, I finally have a few models to show. These are my armor models completed as of yesterday. I have eight of them finally done. First is the 1/72 scale ACE Italian 508CN Coloniale Staff car: My apologies for the poor pics. This is a tiny one and I seemed to have had a tough time keeping steady on this one. In keeping with the theme of tiny vehicles and such, here is my 1/72 scale Airfix British Airborne Jeep from the British Airborne Set: It also came with a pallet to land this thing from aircraft. Here it is sitting on that pallet: This Jeep above was also equipped with a trailer: It was also equipped with a 75mm Pack Howitzer to assist airborne troops with artillery support: Here is the whole British Airborne Set together: Next up, my Japanese Army takes delivery of the 1/72 scale IBG Type 3 Chi Nu Medium Tank: And finally, my Russian Army has taken delivery of three new vehicles. This first one is the 1/72 scale ACE BREM recovery vehicle: It doesn't show well in these pics, but that hook is painted a steel color. I don't know why it shows up this way. Moving on, I also finished up the 1/72 scale Takom MAZ-537 Tractor: Also, in that same kit was the 1/72 scale Takom KZKT-537 Tractor: And that completes my latest run of models for April. I might even have more finished in a week or three. Stay tuned and thanks for looking in, comments are welcome.

The Duke Completes a Commission

New Forum Posts - Thu, 04/04/2019 - 17:12
Today I finally finished up a commission build for a friend on another Forums. This is the Dragon 1/72 scale F-6F 5N Hellcat night fighter. This is one of nine models I finished up this week. The rest are in the armor forums. Thanks for looking in, comments are welcome.

8 (eight!) kits - either improved or new from Italeri in our May kit preview... 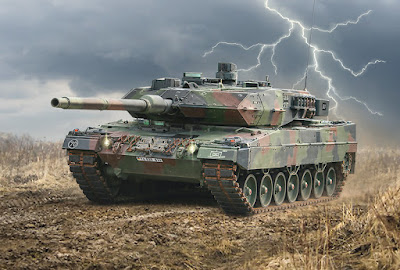 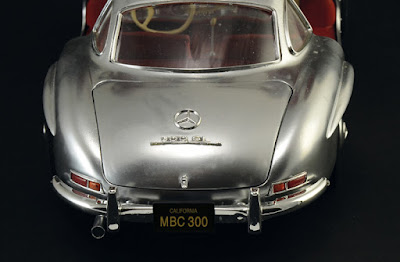 No less than eight kits are slated for release from Italeri this month. Either all new or improved upon kits from their stable, it is still a pretty impressive total - but is it quality over quanity? We have art, colours & sprues in our preview... 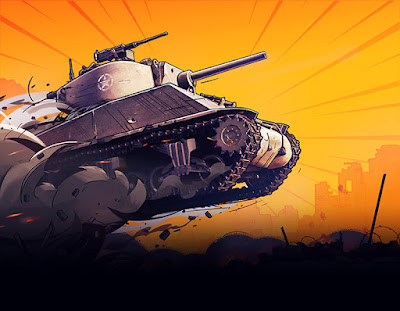 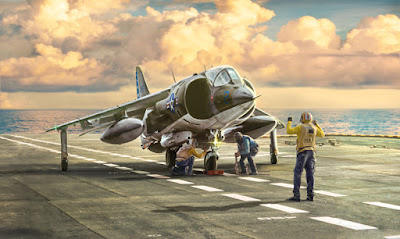 The Mercedes-Benz 300 SL was produced in 1954 by the German car manufacturer and it’s a masterpiece on four-wheels for design, elegance and luxury. The 300 SL, where the acronym stands for Sport Leicht, (Sport Light), adopted innovative solutions for the time. The Mercedes 2 door coupe had a tubular frame, a front 2.996 cc longitudinal engine connected to a 4-speed transmission and the rear drive. The maximum speed of 300 SL was 260 Km/h (162 mph). The real strength of the car, however, was in its innovative design and the adoption of the characteristic and eye-catching Gull-wing doors. Even today the Mercedes-Benz 300 SL is an icon of design and style of the period ant it is a real icon for collectors and fans

The Leopard 2 was developed in the ’70s to satisfy the specific need of the West German Army to have a new modern and efficient Main Battle Tank able to replace the Leopard 1. It is armed with a 120 mm gun and, thanks to its V-12 twin-turbo diesel engine, it is able to reach the maximum speed of 68 Km/h. It entered service in 1979 but, continuously improved in technology, armament and armour, it is still today considered one of the best Main Battle Tank in the World. The Leopard 2 A6, in detail, is a definite improvement compared to the first versions. Armed with a 120mm Rheinmetall L / 55 smoothbore gun, it is equipped with a modern third generation composite protections. The turret shape and the mantlet profile are developed to minimize the impact of enemy hits and anti-tank weapons.

Based on the design of the previous single-seat radial engine fighter Curtiss P-36, the Curtiss P-40 has become one of the most famous and used aircraft of the Second World War. Between 1941 and 1944 he also played a key role in many operational theaters from North Africa to Italy, from China to the South Pacific. Characterized by a very robust and reliable aerodynamic structure, the Curtiss P-40 was equipped with an Allison V-12 engine, capable of delivering more than 1,150 HP. Thanks to it, the Curtiss P-40 was able to reach the speed of 580 Km / h. It served as air superiority fighter and fighter bomber. One of the most successful version was the P-40E. Used by U.S. fighter squadrons and, as Kittyhawk , by Commonwealth Air Forces, the P-40E was heavily armed with six 12.7 mm. M2 Browning machine guns installed in the wings. Furthermore, thanks to its under wings hardpoints, able to carry nearly 900 Kg. of bombs, it was also able to satisfy close air support duties.

The Harrier is probably the most famous aircraft with vertical/short takeoff and landing capabilities of military History. Designed and developed by the British manufacturer Hawker Siddeley in the sixties, it was largely used, in its various versions, by British Royal Air Force and Royal Navy. The United State Marine Corps showed a significant interest in the aircraft that could be the ideal answer the operating needs. The single-seat AV-8A was specifically developed for the USMC and entered service in 1971, in the Marines’ attack squadrons. The AV-8A was able to operate from the ground bases and from the converted amphibious assault ships. The AV-8A could successfully perform close support, ground attack and air defence duties. It was very appreciate by USMC in fact the AV-8A was fully integrated with the other landing vehicles and helicopters during the Amphibious assault operations.

The twin-engine supersonic multirole fighter F/A-18 Hornet has been developed to offer an extraordinary flexibility and versatility. It can perform air superiority, ground attack, close support and reconnaissance duties. Thanks to its flexibility, the F/A-18 has been adopted by several Air Forces becoming a relevant commercial success. It is used, in its various configurations, by US Navy, US Marine Corps, Australian, Canadian, Spanish and Swiss Air Forces. More in detail, 26 single seater F/A-18 and 7 twin seater, equipping 3 squadrons, are currently used by Swiss Air Force. The Hornets of Fliegerstaffel 17‚ the backbone of the Swiss air defense system operating from the Payerne airfield, are recognizable by the eye-catching hawk decoration on the tail, the emblem of the squadron.

The M4 Sherman medium tank was the primary tank used by the United States during World War II. It was the first and most basic production version of the Sherman line and also the most commonly-produced U.S. tank of WWII. It essentially formed the backbone of U.S armoured forces at that time.

The Sherman evolved from the M3 Medium Tank, retaining a lot from this previous design. However, the M4’s design introduced a fully-traversable turret in combination with a 75mm gun.

To facilitate production, the Sherman tank family was modified into a perplexing array of variants – from the basic M4 through to the famous “Easy Eight”.

Shermans first saw combat with British forces in North Africa in late 1942, against the Panzer III and Panzer IV. They would then go on to be used on all fronts until the war’s end.

The tank was easy to produce en masse and quite reliable. A lack of firepower and narrow tracks, which often caused it to get stuck on muddy terrain, were its main weaknesses.

Arguably the best medium tank of World War II, the T-34-85 was a crucial factor in the outcome of the conflict. Over 35,000 were produced, meaning that it also came to represent, from a Soviet standpoint, the supremacy of socialist industry over capitalism.

It was the antithesis of German over-engineering. Designers favoured simple solutions that used fewer resources. It was therefore available in greater numbers – a telling factor as Axis forces were pushed out of the Soviet Union and back to Berlin.

The T-34-85 was an up-gunned version of the T-34 tank which carried a 76mm gun that was insufficient at dealing with tanks like the Tiger and Panther. A new turret allowed the installation of an 85mm gun that was capable of penetrating German armour with greater ease. This tank also represented the first proper mass production of a sloped-hull design which meant that the armour could afford to be thinner while still providing the same effective protection. Coupled with sloping on the turret, the survivability of the tank compared to the original T-34 design was much better.

New Forum Posts - Tue, 04/02/2019 - 18:46
I'm proud to announce my latest E-book. This one is the result of a comment someone on this forum made after my C-46 E-book was finished. To wit: It would be nice to have some reference photos included in the Building Guide. File size limitations prevented that, but I've come up with a workaround. This E-book, intended as a companion to my C-46 Building Guide, contains 49 relatively high resolution historical photos of the C-46A. 22 are operational shots and the other 27 come from the Curtiss assembly line. They've all been enhanced to pull detail out of shadowed areas and can be enlarged at least 200 to 300 percent without suffering pixelation. And if you prefer, since this E-book is offered in PDF format, they can also be printed if you prefer hard copy. Price? $3.99 and can be purchased by going here.