Tamiya has really stepped up it's game in the figure department in the last few years. Starting with single figures and sets in the re-boxing of the Marder III M, Hummel, and 38 (t), the new designs have really made assembly and posing easier than ever. There are notches and tabs that help align the shoulders, legs, and torsos (molded in front and back halves) to avoid any gaps. There are also molded indentations on the back of the torso and in the pouches to attach the extra equipment to so they appear to avoid them looking as if they're simply resting on the torso and belt. The included facial details are also much more expressive and individualized than in the past. In one figure, there is a separate boot and another has a hand separate from the arm which is a bit odd. The drawback to the parts being so specifically keyed to each other is that they really aren't interchangeable. Mold lines are subtle and one figure had some pinholes near the eye that showed up as I was taking my close-ups for the review. That being said, the figures as is are really very good.

Inside the side opening box are two sprues for the five included Heer soldiers and a sprue containing weapons and equipment. There is also a set of decals for helmet and uniform insignia, shoulder flaps, collar tabs, belt buckles, and first aid can details. The equipment sprue contains three Kar-98 rifles, a MP40 submachine gun and ammo case, a MG34 machine gun and ammunition case (or first aid box), a grenade case with detailed insert, a pair of binoculars, a couple pistol holsters, and an assortment of bread bags, canteens, mess tins, entrenching tools, and gas mask canisters for each of the five figures.

Out of the five figures, three are labeled as Infantry. Infantry 1 is shown "taking a knee" next to the grenade case holding a Kar98k rifle. There are options for two heads- one with helmet and one with cap. This is the aforementioned figure with the small pinholes near the eyes. Infantry 2 is shown posed with one foot atop a small pile of rubble included in the kit, also holding the Kar98k. Infantry 3 is shown standing with his rifle by his side and holding an ammunition case. This is the one true weak spot in the design of the kit for me-- you are to just glue the case to his leg under his closed fist with no visible handle in sight- and if you want to add one, you'll have to drill a hole through the fist to pose it.

The remaining two figures include a non-commissioned officer and a machine gunner. The officer is shown holding binoculars and an MP40. He also has the option of the two different heads. The machine gunner is shown holding his MG34 over his shoulder by the front tripod. In all cases (except Infantry 3), the hands are perfectly molded to hold the weapon or item illustrated.

After assembly, I primed the figures with Krylon gray for plastic. I used a Vallejo paints for the figures and equipment and AMMO by Mig metal pigments for the metal areas. My figure painting skills aren't the best, but it is nice to have some good expressive figures to use for a base. I kept weathering to a minimum as I am not sure yet what sort of vignette or diorama they'll be placed in. Overall though, I am very pleased with the quality of the figures that Tamiya are putting out now-- they really are molded as nicely as most resin figures I have seen. My sincere thanks to Tamiya and IPMS-USA for the review sample.

New Forum Posts - Thu, 07/09/2020 - 11:01
Developed late in WW I by Germany after encountering British tanks, only 20 armoured tanks were produced. It was armed with one 57mm main gun and six 7.92 MGs and needed a crew of 18! It was large, cumbersome, awkward and slow and was a less than exciting success. However, it did figure into the first tank vrs tank combat when three A7Vs encountered three British Mk IV's (one male armed with two 6 pdr. main guns and two females armed only with MGs.) during the First Battle of Villiers-Bretonneux. The two female Mk IVs were damaged and had to withdraw, but the male continued to fire on the lead A7V, eventually disabling it and forcing the crew to abandon the vehicle. The two remaining A7Vs then withdrew, leaving the 'field of battle' to the lone Mk IV. This is the Emhar kit that has been re-released. It's typical Emhar in that the detail is minimized, but what is there is nicely done. My main complaint is that the slab sides have beveled joints, so getting them to mate up without any gaps takes patience and care. The decals give you a choice of three vehicles, but all have pretty boring camouflage. Also they are a bit thick and have a large amount of carrier film around them that must be trimmed to avoid silvering over all those rivets. I found an interesting camo pattern in a photo I saw on Google and dressed it up a bit with a new name and the eyes on the front. It makes a nice addition to my WW I vehicle collection. 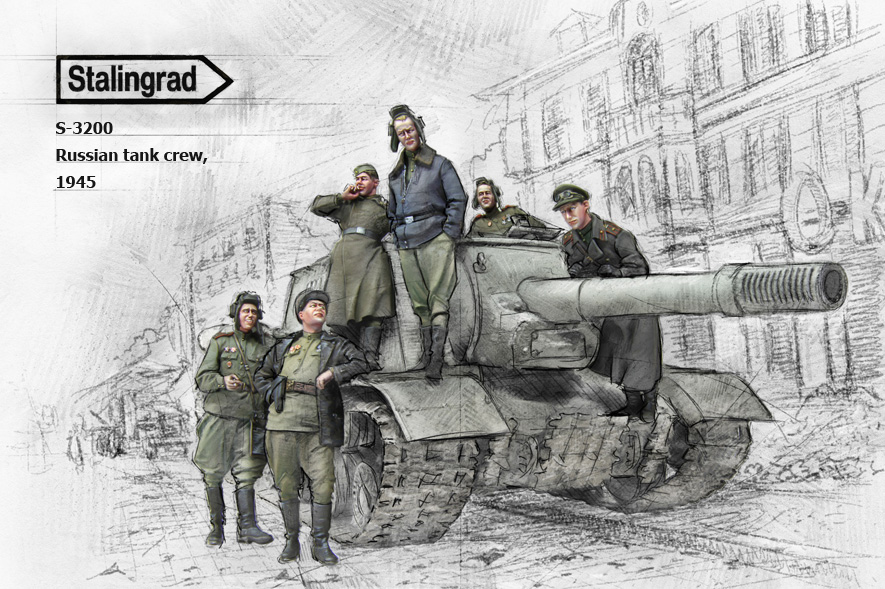 Stalingrad Miniatures has a new big set of six Russian soldiers from the end of WWII for us this month. Seen posing for a picture or just at rest around their mount they look like an interesting proposition. See what they look like as well as the pictures that inspired the sculpts in our preview.
Read on... »

BRAND-NEW 2021 FORD BRONCO, AND A REVELL BRONCO FROM AN EARLIER ERA


OFF-ROAD DRIVERS rejoice, for the 2021 Ford Bronco is due to be revealed next week. This will be the seventh-generation Bronco, even though the line ceased production back in 1996. For scale fans, a 1970s-era Revell Bronco is available in 1:25 scale.
Read more »
Categories: News

Preview: Takom is making a Panzer III Ausf.N in 35th scale for August... 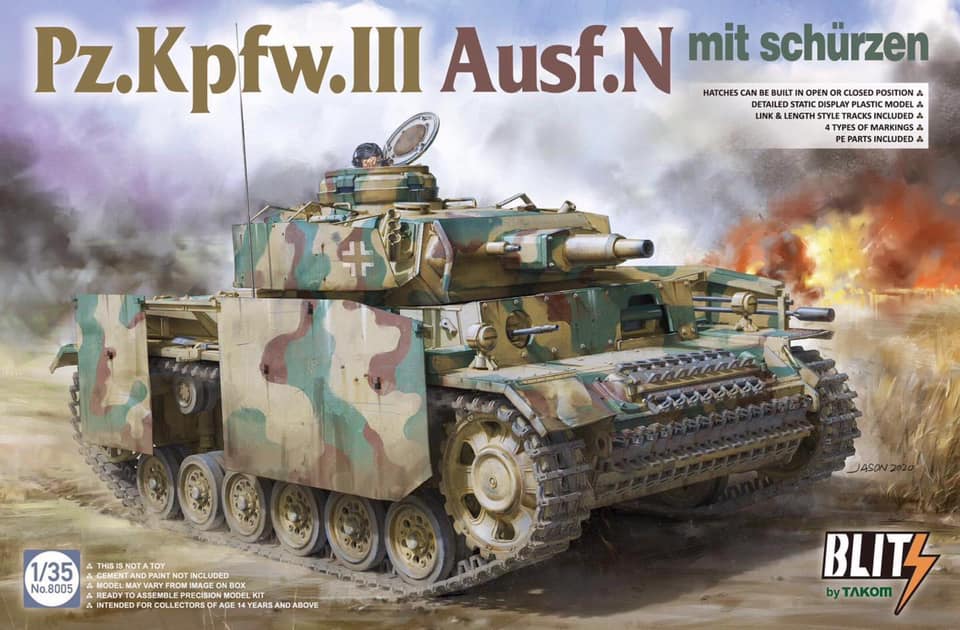 Takom keeps picking those targets a lot of us have a hankering for. The short-barrelled Panzer III Ausf.N is up for the 1/35th scale treatment in their "Blitz" range. Blitz promises fast builds with plenty of detail. Let's see what we can glean about this kit and the real thing in our preview...
Read on... »

Scale Model Podcast - Tue, 07/07/2020 - 21:10
This is the first of a series of videos by Terry Miesle. Besides here, StarShip Modeller will also have them available for viewing. Terry will be covering a wide variety of subjects.  Patreon users will have 1-week exclusive access to them. In these videos about benchtop casting, I hope to show everyone it’s pretty simple […]
Categories: Podcasts

Preview: Alpine Miniatures two new figures - singles or as a set - from the 12th SS in WWII in 35th scale 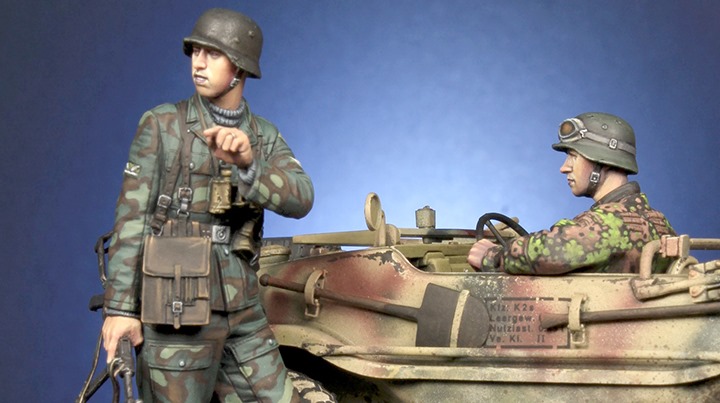 Alpine Miniatures has surprised everyone with the very quick release after their preview of two new Waffen SS soldiers the other day. They are already painted up by the talented Dr Jin Kim and take their space in our preview of both figures from Alpine this July...
Read on... »

New Forum Posts - Tue, 07/07/2020 - 01:14
All, You may have seen the post I have up on FB. I am helping an older Air Force vet who was supposed to pass a couple years ago but is still kicking. He wants to sell most of his collection before he passes so his wife isn't stuck with them. I still don't have a list put together, going to try and work on that this week if I get time. Do have a bunch of pics though stuff has been selling well. Mostly 72nd aircraft with a bunch of 72nd armor and a few old Monogram 48th scale kits and 3 32nd scale 109s. Only car left is a Revell 1/40th scale Beetle from the early 60s. Also an old Revell X-15, Aurora C-119, bunch of FROG, Airfix/MPC, Hasagawa and more. I will attach a few pics and if you see anything that interest you just let me know. My biggest problem right now is tracking down boxes to ship.